Having started seeing some more live music again recently, I was inspired to repost some music-related stories from the vault (originally on my old, now defunct, website).  The first is an interview from back in the 1990s with the then Brisbane-based electronica act, Boxcar (they since changed their line-up and moved to Sydney).  Boxcar went on to release a follow-up album Algorhythm in 1996 and reformed around 2007 for some live dates.   Boxcar’s current activities can be found at their website.  It’s interesting to see how much has changed, back then there was a real divide between “dance music” and “rock” in popular music, which seems to have been entirely erased. 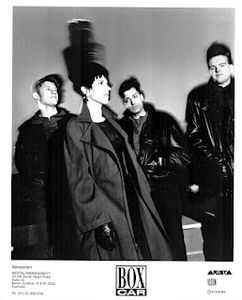 This Brisbane four-piece (Carol Rohde and Crispin Trist complete the line up) are making a niche for themselves in a genre that has spawned a host of sound-a-like, fly-by-night acts and they certainly don’t fit into that moribund format of “Oz rock”. This a point which Brett Mitchell brings up: “You can see rock bands getting desperate by those Choirboys posters.” “Have you seen those posters?”, adds Smith, “Classic. ‘Fuck Dance, Let’s Rock’. I mean how many dance acts do you see saying ‘Fuck Rock, Let’s Dance’? They don’t seem to feel threatened by rock music.”

we were saying things like ‘you like AC-DC?’, ‘yaaah’, ‘well we’re not going to play any crap like that’ – and there were threats at the mixing desk”

Their underrated debut LP Vertigo ranges from the house-y pop of “Gas Stop” and “Insect” to the more experimental instrumental tracks “Comet” and “Lelore”, which lie firmly in the territory of Severed Heads and Cabaret Voltaire. From the sound of their album to the energy of their live shows it is obvious that Boxcar is an act built to last. Since their inception in Brisbane in 1985 they have done the thankless task in Australian music of “paying their dues”, which involved lugging other bands PAs as support acts to performing to rather unreceptive crowds. Smith recalls with amusement winning a band competition: “We were setting up the gear and looking out at this crowd .. and thinking uh-oh..so we decided to stir them up a bit.. were being very cruel.. we were saying things like ‘you like AC-DC?’, ‘yaaah’, ‘well we’re not going to play any crap like that’ – and there were threats at the mixing desk”

Successful supports with Depeche Mode, Erasure and appearances at various dance parties, including Sydney College of the Arts’ mid-semester “Bedlam” has built their profile in this country (while making respectable dents in the US dance charts). Although apparently some of the punters still don’t quite know how to react to dance music done live as a recent appearance at “Pure” demonstrated. Smith: “When we played in Melbourne, we had a packed out venue, we played a pretty decent show and they sort of stared and didn’t know what to think.” Preferring to run sequencers instead of tape, triggering samples live and real percussion, Boxcar have an edge over other dance acts which are often criticised for sounding totally “canned”. “We found that by using tapes that…live synths actually sound better. Anyway”, Smith notes, “I think the whole tape thing is out of proportion. You should check out the absolutely gi-normous keyboard rig U2 have behind stage. I can show you the article with the big fat colour photo with their keyboard technician” Smith has a point, it’s somewhat ironic for an icon of live sweaty rock to rely heavily on technology, something which Boxcar certainly don’t disguise. 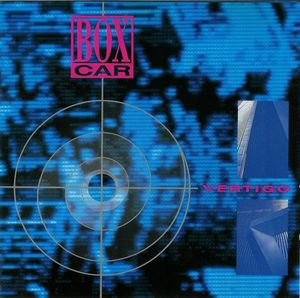 Musically, Boxcar have their fingers on the pulse of dance music whilst retaining a sense of perspective. One can hear echoes of early Severed Heads and Front 242 to newer rave acts such as Quadrophonia. Both which share a certain affinity: “It amazes me how much of the full-on techno stuff that’s coming out of Belgium and the UK at the moment sounds like Chris & Cosey and the really old 80s stuff – it’s really synthy, even though there’s more of a groove in it.” Densely layered production, some wild samples and variable rhythms provided by drummer Crispin Trist ensure that Boxcar don’t fall into the traps of either a Pseudo Echo-style synth band nor a Technotronic/C&C Music Factory “Get down, move your body” house mentality.

Their best song “Lelore” uses an eerie Bedouin-like wailing. “We got that from a tape of some African music..I’m interested in picking up some Japanese singing..but it has to be a really good passage and you’ve got to build a really strong song around that passage, which is what we tried to do with “Lelore”, we didn’t use the sample as a ‘bit’, we used it as the focus of the song.” Boxcar are also renowned for working with some fairly legendary producers: Francois Kevorkian of Kraftwerk fame, being a notable example, though they admire the work of English producers William Orbit, Paul Oakenfold and Andy Weatherall and newer underground producers such as Apollo 4-40, The Orb and Hypnotone. Smith is, however, quite aware of the pitfalls associated with producers: “I think that the role of the producer has been confused over time. I mean, how do people know what what the producer did and what the band did?” “Yes, only we know what the demos sound like”, points out Mitchell.

There’s a spirit behind certain acts, like obviously Kraftwerk and 808 State, they’re undeniable.. you can see how amazingly ahead of their time Kraftwerk have been.”

Their deal with BMG/Arista should see them get world-wide distribution and while Smith sings praises for their local independent, Volition, he remains extremely cynical about the record industry as a whole: “I see record companies signing certain bands and I think what the fuck are they doing it for? – we already have ten Australian artists exactly like that! Daryl Braithwaite – they’ve been trying to break him overseas for years – there’s a billion guys over there like him a billion.”

Smith is optimistic for the future of dance music “Once the rave thing starts to move on. I think you’re going to find things move on to a new phase … dance music is going to move in a more melodic direction.” However, we have to go back in time to find the ongoing influence of Boxcar. “There’s a spirit behind certain acts, like obviously Kraftwerk and 808 State, they’re undeniable, you listen to their [Kraftwerk’s] remix album .. you can see how amazingly ahead of their time Kraftwerk have been.”

Based on transcript of interview done by Michael Gadiel and Alex Lancaster for Radio Skid Row (88.9 FM) and originally published in Sydney University’s Union Recorder.