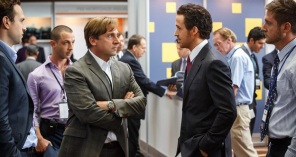 Although the banks are the chief villains, it indicts almost every institution involved: from the asleep-at-the-wheel government SEC “regulators”; to the Wall Street Journal reporter who doesn’t want to print anything controversial, lest he lose his “access” to his sources; to the real estate agents who pressed the subprime loans onto people who barely spoke English. 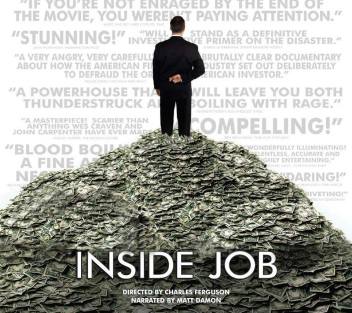 The only profession left out of The Big Short was academic economics, certain parts of which, as Charles Ferguson explored in detail his documentary Inside Job, underwrote some of the magical thinking that led to the crisis.  He documents cases where some professors had published academic articles furthering the cases of individuals or institutions without clearly disclosing any actual, or potential, conflicts of interest.

A particularly striking case was that of the then-dean of Columbia Business School who co-authored a 2004 article with the chief economist at Goldman Sachs titled “How Capital Markets Enhance Economic Performance and Facilitate Job Creation“.  According to Ferguson the dean has refused to state whether or not he had been paid to write the paper, but one line has a certain famous-last-words quality:

The capital markets have helped make the housing market less volatile … ‘Credit crunches’ of the sort that periodically shut off the supply of funds to home buyers … are a thing of the past.

Like David Simon’s television series The Wire,  The Big Short is somewhat bleak on the prospect that any of the current institutions in modern American are able to look out for the common good. There’s no obvious “hero” and many of the characters working in these institutions at top levels are depicted as being either callous, mendacious or greedy, completely unconcerned with the effect of their actions on others.  I think it’s also no mistake that they even sneak in some background footage of both Barry Bonds and Lance Armstrong, to indicate the rot extends into other areas of American life such as sports. The most poignant scene for me was when two young traders walk into the now-empty Lehman Brothers office and one asks the other what they expected to see, the reply: “I thought I’d see grownups”.

The most poignant scene for me was when two young traders walk into the now-empty Lehman Brothers office and one asks the other what they expected to see, the reply: “I thought I’d see grownups”.

As many reviewers have pointed out, it will make you angry, but you’ll also know exactly why you’re angry.  It was a true systemic failure of an interlocking set of institutions, embedded within a culture suffering from a case of clinical-grade empathy-deficit disorder, not one single “big bad”.  And the sad thing is that it could easily happen all over again. As the film points out in a coda: the banks are bigger than ever, the Dodd-Frank reform was weaksauce at best and not a single executive has gone to jail. Whether our institutions can truly be redeemed is, I believe, really at the heart of what is driving the current 2016 election.

Both Sanders and Trump are essentially positing that they cannot be redeemed, and I suspect that part of their appeal is that many in the American public agree with them, based on the aftermath as well as the crisis itself.  Although ideologically they are polar opposites, both of their arguments essentially boil down to: it’s up to us to fix things. The Washington/Wall Street corporate technocratic elite that have governed us for the last 30 years will not save us, since they can barely save themselves (a point that I made in a previous blog). After watching The Big Short, you may be inclined to agree.

One thought on “Hollywood’s take on Wall Street: The Big Systemic Corruption”